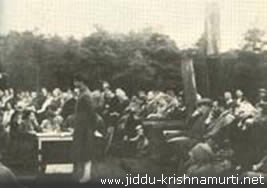 This book contains the answers to the fundamental questions at the seventh International Camp of the Order of the Star held at Ommen, Holland, August 1928.
Many questions were put to Jiddu Krishnamurti with regard to matters which were troubling the minds of many people, such as: -You say that there is no God? -Have you one teaching for the masses and another for your chosen disciples? -Are you the Christ come back?, etc. The answers to these outstanding questions and many others are included in this book, from a man which was once proclaimed to be "The World Teacher" and "Vehícle of The Lord" .

I am going to answer all these questions from my point of view, and I am not basing my answers on any authority whatsoever. I know that you would all like my answers to be based on authority, but I am afraid you will be disappointed. I am not urging you to accept that which I hold to be the absolute Truth, but I am leaving it to your own judgment, which alone is valuable, which alone is lasting and which alone should guide, uphold and protect you. So with this in mind we will proceed, and please have patience, and listen diligently, because I know that if you do not understand wisely, you will ask these same questions again next year.

1. Certain statements have been made with regard to you and your work which seem to be so fundamentally different from your teaching and from the Truth you set before us that we should be grateful if you could give us an opinion with regard to them. In 1925 you selected seven Apostles, the remaining five not yet having attained the necessary Arhat level. Now you say that you have no disciples.

2. The Liberal Catholic Church and the Co-Masonic Order were said to be two organizations specially chosen by the Lord Maitreya to carry out your work. Now you tell us that all ritual and ceremonial are unessential and step down the Truth.

3. It is said that with your coming, evolution is quickened in all beings and that the number of Initiates in the world will be rapidly increased. But you tell us that these stages on the Path are unessential and that Liberation may be attained at any stage of evolution.

4. We have been told that the World-Mother will manifest in order to complete your work and that the disciple through whom She will work has already been selected. You tell us that these distinctions of male and female do not exist in Truth because Life is one.

6. Some people hold that while the World-Teacher has no concern with the founding of a new religion yet the Bodhisattva Maitreya in His larger Cosmic consciousness is concerned with and supports all religions and creeds.

7. It has also been said that the Christ works essentially through the Liberal Catholic Church and but a portion of His consciousness manifests through Krishnaji. May we have your opinion on both these points?

8. Are we to take it that we should not fear to carry the implications of your words to their ultimate conclusions?

9. Have you one teaching for the masses and another for your chosen disciples?

10. You say that God is only in us, there is no other God. Will you kindly explain this important saying a little more, as the whole world believes in a God outside ourselves, a Creator of all, and you yourself speak of the Beloved, the Guru -the name is of no importance- others speak of Buddha, Christ, God. How can you reconcile these statements?

11. Krishnamurti says that we should not follow or obey any authority whatsoever. How far should this principle be applied to members of the Theosophical Society, who are very much governed by authority? Or even to the authority of Krishnamurti himself?

THE MASTER SINGER OF LIFE

At the seventh International Camp of the Order of the Star held at Ommen in Holland, many questions were put to Jiddu Krishnamurti with regard to matters which are troubling the minds of many people. The answers to those questions were of so fundamental and far-reaching a nature that we have felt it imperative to issue them in pamphlet form without delay. It is essential that an accurate report of Krishnamurti's answers should reach members in his own words rather than through garbled and distorted accounts given from inadequate notes. The questions considered may be of greater interest to members of the Order than to the general public but as Krishnamurti in his replies always takes us to the great height of his own illumination and makes clear to us problems more far-reaching in extent than those represented by the actual questions put to him, there may be many even outside the Order who will find in his answers a reply to their own difficulties.

"LET UNDERSTANDING BE THE LAW, reflects clearly how Krishnamurti’s attitude broke down the mysticism links which attached the believers to theirs chiefs so far. The disturbance gets worse when Krishnamurti reafirms that the occultism ideas, of sanctuary, of discipleship, of master, cannot spiritually approach man to the Truth. Many old believers begin to understand that the path to Truth does not cross the Theosophical Society and The Liberal Catholic Church." -FRANCISCO AYRES

Jiddu Krishnamurti, Let Understanding be the Law. The seventh International Camp of the Order of the Star.